The Hemet Jeep Club is a non-profit organization and was one of the first four-wheel drive clubs in the United States, dating back to the late 1940s.

HJC is a family-oriented group of four-wheelers dedicated to promoting responsible off-road fun and land preservation. The primary function of the club is to get together and have a great time offroading.

The club schedules runs of all types, from milder runs for the stock SUV owners and new four-wheelers, to extremely challenging trails for the more experienced enthusiasts.

Whatever run you choose, you’ll have an opportunity to meet some other fellow four-wheelers and have a good time.

The Club meets the second Wednesday of the month at 6:30 pm at various locations. Guests are always welcome to attend meetings and runs. For specific meeting locations, please contact Mike Ledbetter

Members of the HJC are actively involved in preservation efforts to help protect the natural environment and promote responsible off-road activities. The club participates in the “Adopt-a-Trail” program where it is responsible for maintaining the Indian Mountain Road in the San Jacinto Mountains, as well as taking part in various clean-up efforts throughout the region.

Founded in the 1940s and incorporated in 1962, The Hemet Jeep Club was originally known as the Hemet Cavalcaders and was one of the first jeep clubs in America. From the beginning, the Hemet Jeep Club became known as a “cornerstone” for four-wheel drive events after starting some of the first organized jeeping events in the nation, including the Hemet Jeep Cavalcade (an annual event which attracted as many as 400 vehicles over a two-day drive on the historic De Anza trail) the Afton Canyon Junket and the sand drags.

The first jeeping trips to Truckhaven Hills made by the unofficial club dates back to 1947.
The first automobile through CoyoteCanyon was made in a Buick car back in May 1925. William Martin which owned the old down town theater.
In 1966 the Nelson Machinery Company donated six new Scout vehicles to be used by the women in the competitive driving event during the De Anza Cavalcade.
First Hemet Jeep Club meetings only had refreshments served during the meetings and potlucks where for special occasions (installation) or for the river bed meeting (wiener roast). 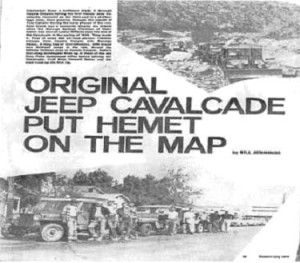 Trip from Hemet to Idyllwild and back the Hard Way: Suddenly a left turn, then right and we were going up the San Jacinto river bed. Then a right turn to the top a mesa for a better view! Then only one thing that appeared to those following “The fearless leader”, was the bottom side of the right bumper, spare tire, etc. As seen when a jeep stands on its noise. Wow! Who dug that hole? Well after patching up cut eyebrows, skinned knees, etc. Sway we go up Indian Canyon to view Palm Trees, a Hot Springs that still flows in the upper end of Indian Canyon-is this where Chuck Howard catch a 50 inch 12 years ago .. or is it the other way around. Boy, it sure helps when you keep an eye on the jeep behind you, but it sure is hard to have the fellow follow- some fellow like Bill Cummings. He lead the rear half of the group the wrong way. Boy – listen – if Bill ever follows you put up signs for him, hope you had fun. Then there was Roy Simmons. Roy where did you get all the barbed wire around your drive line? Well so much for that – everyone back in line, thanks to two-way radio. Boy these modern conveniences.